Call me old fashioned, but I’m not a huge believer in taking supplements, and would rather get my nutrients by eating real, whole foods, rather than spending more money than I’ve got on a powder or pill every month. With that being said, I am certainly open to finding new, better ways of doing things, and with creatine constantly being a supplement questioned by athletes and coaches, I figured I better do my own research and share my thoughts and findings with the fine supporters of Sled Dog Development.

Creatine supplementation is often viewed as something that is meant for meat missile hard-o’s at the gym, but there may be some real benefits to taking it as a high-performance athlete.

Creatine is an organic compound (Amino Acid) that is mostly found in your muscles. It can be made both synthetically, or through the ingestion of red meat or seafood. Creatine is stored as creatine phosphate in muscle stores.


Creatine phosphate is used in the first couple seconds of exercise to create a quick supply of ATP (energy source used by your body). Your muscles use this ATP for explosive, powerful movements before quickly running out, then relying on glycolytic function, and eventually, the aerobic system to produce energy during prolonged exercise.

Why Supplement Creatine When Your Body Can Already Make It?

There is a certain capacity for creatine in your muscles, one that is hard to maximize by eating food alone. Actually, it would be almost impossible to consume enough amino acids to cap this out (eating about a kilogram of beef every day should do the trick).

But why do we want to reach the capacity of our creatine store? Well by having more creatine readily available in our body when we go to perform a set of exercise, the initial, explosive burst that we received from the phosphocreatine system will last longer and have more intense effects. After a period of rest, these stores will replenish faster, having you ready for another set of high-quality reps.


Of course, this is ideal because we are now able to do more reps with similar quality and explosive characteristics as the first. More of these reps means further adaptation, which puts a big smile on my face when training an athlete.

What Are The Side Effects of Creatine?

All of this sounds a little too good to be true, right? You get more quality reps, AND can do so for longer periods of time? Usually, something this good for performance makes at least a couple of things shrink. I’m thinking what you’re thinking, there must be side effects. Well, the truth is, I can’t find many pieces of reliable scientific research that show consistent negative side effects of using a creatine supplement. I love looking at things from both sides and playing the devil’s advocate before hopping on the hype train, but from what I have found, it is a safe supplement that sees great results. I am going to go through a list of common concerns that I have heard about creatine supplementation and share my thoughts and findings:

Yes, bloating will most likely occur after starting creatine use. This is actually because the muscles now uptake way more water than they previously did, leaving a bloated look. Don’t worry though, because this only typically happens in the first couple of weeks during the loading phase (more on that later), and should go away later. This can be avoided by skipping the loading phase altogether, but the benefits of the supplement will be more gradual.

Rapid weight gain usually occurs in individuals using creatine. This is mainly due to the water uptake in the muscles as previously mentioned in the bloating section. One particular study showed that when taking 20g of creatine/day, as you would in a loading period, body weight tends to increase 2-6 pounds (1). This water weight eventually goes away.

Longer-term weight gain is usually due to an increase in muscle fiber size (usually considered a good thing, as an increase in strength is often a great goal, but may not be beneficial in athletes where maintaining weight is crucial. ie. Weighted combat sports and certain swimming or running athletes).

Dehydration would make sense based on the last 2 points, but there haven’t been any accurate studies that say creatine use causes dehydration or cramping. A 3-year study involving post-secondary football players showed that quite the opposite is true (2). Players taking creatine supplements actually had fewer cases of muscle cramps and dehydration. Dehydration shouldn’t be a concern big concern for creatine users.

Although an increase of creatine in the body leads to an increase of creatinine, which is filtered in the kidneys, and excreted as urine, the idea that this, or any other factor has a negative effect on the kidneys, is false based on recent scientific research (3). With that being said, you should still be cautious and consult a professional if you have previous liver or kidney issues before taking creatine.

What is the Best Creatine to Take?

Okay, so you read everything, do your research and now decide that creatine is something you think will increase your performance in sport. The next step is finding which form of creatine is best for you (it’s never simple). There are actually tons of different forms of the supplement because companies want to have a new and innovative reason to sell you their product. Some common claims you will see on packaging are that a particular form requires less water intake, in turn reducing bloating, or that it may absorb easier in water making the dosage required smaller.

While these claims may be true, there is simply not enough research behind these new versions to sway from good ol’ fashioned creatine monohydrate. With the monohydrate form being the most studied, cheapest, and proven to be highly effective for training, it would be hard for me to recommend another product.

The specific creatine supplement that I recommend to athletes is Kaizen Naturals Micronized Creatine. The reason I recommend this particular brand over others is the fact that it is NSF Certified for Sport which is incredibly important for my athletes who are drug tested on a regular basis and we trust it enough to use it ourselves. Use our code SLEDDOG to get 20% off! 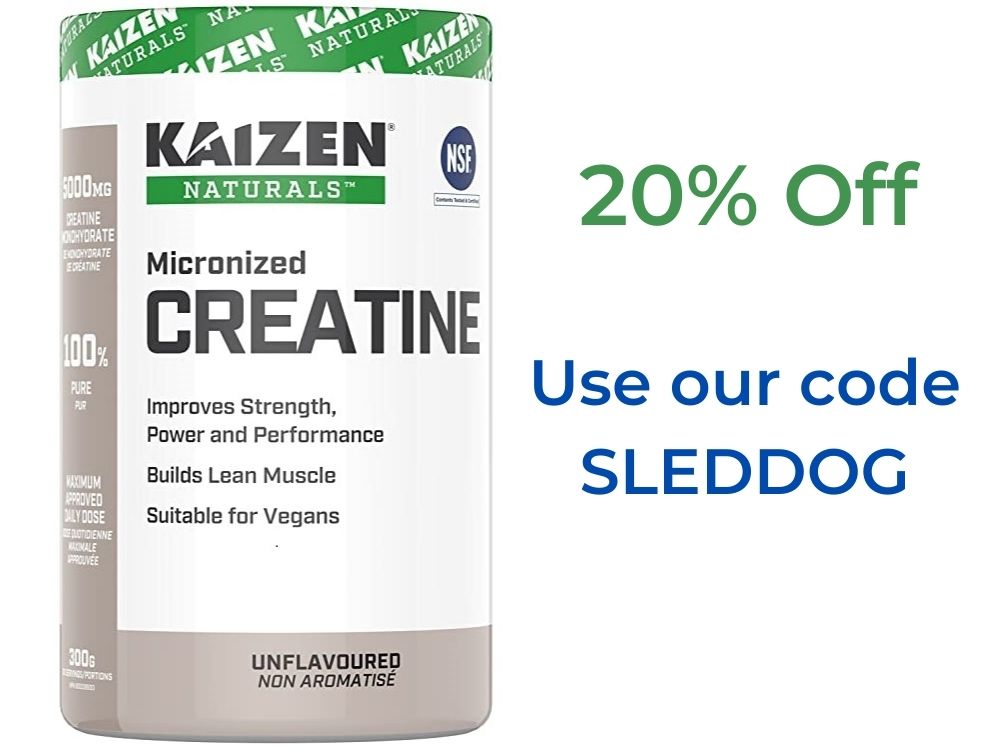 How To Use Creatine

Most research that I have come across recommends a loading period before consistently using the supplement. Typically, our bodies hover around 60-80% of our total capacity for creatine (coming from our diet, without supplementation), meaning we would have to take a relatively large amount in a small period of time to rapidly saturate your muscles and reap the rewards it has to offer. An effective loading period would consist of taking about 20 grams every day for a week to fill in that 20-40% of unused creatine “storage” space (4). After this, a mere 3-5g per day would maintain a full creatine capacity.

The other route you could take in your creatine journey is a more gradual approach to get to the end result. By skipping the loading portion as outlined above and going directly to the daily consumption of 3-5g per day, you will still eventually boost your total creatine levels and get the same benefits, but it won’t happen nearly as quickly. While avoiding the loading phase of creatine will still certainly get you there, a week-long loading phase is a safe and much faster approach to harvesting all the benefits creatine may bring to an athlete.


Of course, these recommendations are based on the research of creatine monohydrate and could vary depending on things like the type and brand of creatine you’re using, your current diet, and even your weight, so it is best to follow the instructions that come with the product.

When To Take Creatine

Should You Take Creatine Before or After a Workout?

A common debate for many supplements is whether you should take them before, during, or after exercise. Some compounds like protein are more beneficial to take directly after a workout, but when should you take creatine? To be honest, I love geeking out over small things like this that might make a difference, but it really doesn’t matter as long as you take them. After the loading phase, your creatine stores are already going to be quite high, making a couple of hours not a huge deal in the grand scheme of things.

How Close to Exercise Should You Take Creatine?

One particular study concluded that it might be more beneficial to take creatine closer to the time of exercise to increase lean body mass and maximal strength (5). This study also had subjects taking protein and carbohydrates along with creatine, however, so it can’t be fully concluded that the creatine was the sole reason for these positive adaptations.

All in all, if you take the creatine supplement daily, you should start to see the outcomes that you began taking it for, regardless of when you take it.

My Thoughts on Creatine

Like I said before, I am most definitely not the gym bro whose pantry is full of different powders and pills. With that being said, creatine is a supplement that I would certainly recommend to any athlete wanting to be more powerful and see improved training results. There is a ton of both short and long-term research on supplementing creatine, none of which I could find that would have any harm on a particular athlete.

Obviously, I would never force an athlete to take creatine, but being one of the cheapest, most effective, and safest supplements on the market, creatine monohydrate seems like a no-brainer recommendation to me!