How to Increase Your Vertical Jump

There are a million different internet “gurus” with their own jump programs that they claim will make you jump higher, but it’s hard to sift through the BS and choose one that will actually work. That’s why I want you to understand the science behind increasing the vertical jump so that you can build something that works for you.

How To Do A Vertical Jump Properly

Understanding the physics behind the vertical jump will help you to both perform during games and maximize each jump within your training.

I am going to run through each portion of the vertical jump from a biomechanical standpoint and explain how to optimize each one.

The setup stance is often neglected by athletes, but hugely important to jumping high.

Your feet should be directly below the hips with the toes pointed forwards. This way, when you straighten your legs, they will push the hips and torso straight upward. If the feet are placed any wider, the force that they are putting into the ground will cross their body and some of the forces being generated will be lost, resulting in a lower jump.

There is a very specific sequence of joint extensions that needs to take place during the take-off phase to maximize your vertical height.

To begin, there needs to be a countermovement. This is just a fancy word for an athlete dropping into a squat. The faster that the athlete can get in and out of this position the better, and usually, more effective the jump is.

From there, the first joint extension that happens from the squat position is hip extension where the torso drives upwards. Once this has begun, the legs begin to straighten at the knee joint which is closely followed up by the toes pointing down in ankle extension. Once in the air, the body should be completely vertical in full extension.

This is the sequence from which the most effective jumping stems. There will be a ton of overlap between these stages but the rising of the torso must always be followed by knee and then ankle extension. Young athletes often raise the torso last, or sometimes not at all, resulting in sub-par jumping performance. 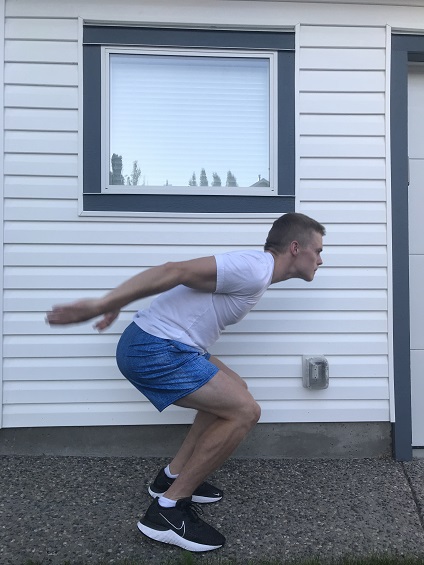 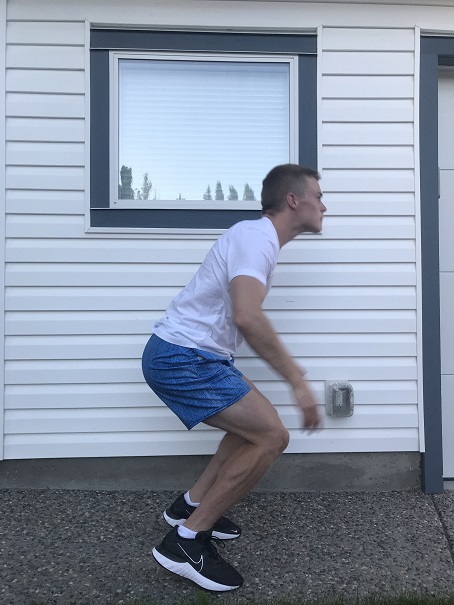 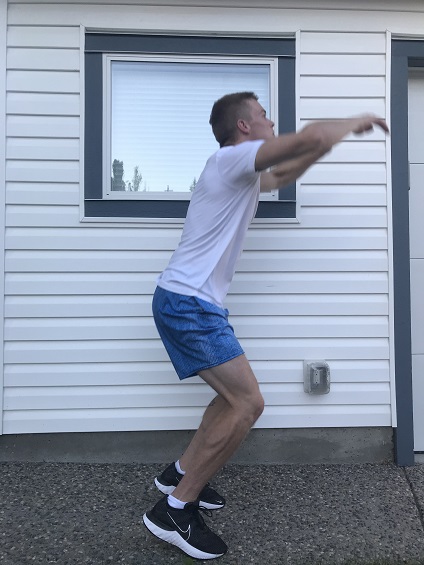 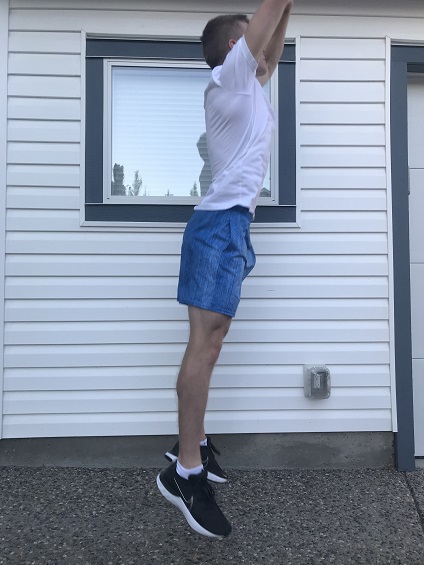 The upper limbs are a critical part of effective jumping. Not only does driving the arms upwards during extension help create upwards momentum, but driving them downwards during the countermovement squat will put more eccentric force on the legs, allowing for more force to be utilized during the concentric (upwards) phase. (1)

To learn more about utilizing triphasic muscle patterns I strongly encourage you to check out my recent article on Triphasic Training.

Landing correctly is just as important, if not more so, than a good take-off. If you’re injuring yourself during the landing phase you won’t be able to train or perform at the same level as while you’re injury-free...duh!

When preparing for landing, your feet should be directly underneath your hips so that your leg muscles can effectively absorb the forces of the ground and slow you down. The balls of your feet should make contact first, followed by your heels immediately after. Aim for your foot to create a 45-degree angle with the ground as you make contact for a safe and effective landing. This allows the strong arch in your foot to absorb a large chunk of the landing force so your knees don’t have to.

How to Increase Your Vertical Jump Through Training

Training to improve your vertical jump should be an ongoing process, not a month-long program that somebody is trying to sell you. Understanding the principles needed to jump higher is one thing but applying them is the next step. A higher jump needs strength, speed, and power. Let’s dive in.

Balancing Strength and Speed To Maximize Your Vertical Jump

Mastering the technique is crucial for a good jump, but to turn that into a great jump requires power. The key to achieving a great vertical jump is to maximize your overall power-body weight ratio. This means a couple of different things.

First of all, lowering your body weight will help maximize this ratio. Obviously, the more mass that you have to move, the slower the movement will be. For example, an athlete that is 15lbs lighter than another will jump higher than them... granted they can generate the same amount of power in the same amount of time needed to jump.

That’s where the next critical piece of the ratio comes into play. Power is the product of strength and velocity. To maximize the ratio and increase your vertical jump, you must be able to produce more force in a smaller period of time. (2) It’s really that simple! I will talk about some different ways you can do that and run through a couple of sample exercises in the next section to increase both strength and speed.

Training to increase your vertical jump height should be a continuous effort. As with any part of training, a month-long program will not create sustainable gains.

There are many different ways to structure a vertical jump program. This is an easy-to-follow one that will help you jump higher.

Start by training strength hard for about 3 weeks, then move into a power phase for roughly 2 weeks, and by then you’ll be ready for speed exercises for a week or two.

Resistance training is absolutely crucial. There are countless benefits to lifting weights, but the main one that I’ll be covering here is the ability to produce more force, also known as strength. Creating more force is half the battle when trying to jump higher. 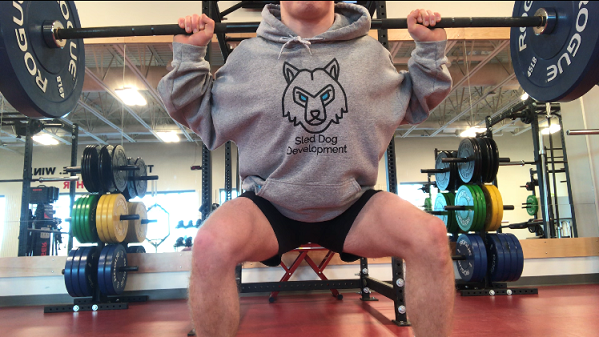 Throw some more plates on and get squatting!

The next step is to turn your strength into speed. If you only work out to be strong, you’ll be able to produce tons of force, but for that force to be useful, it needs to happen quickly (same thing if you only train speed, but opposite effect). That’s where speed training comes in. 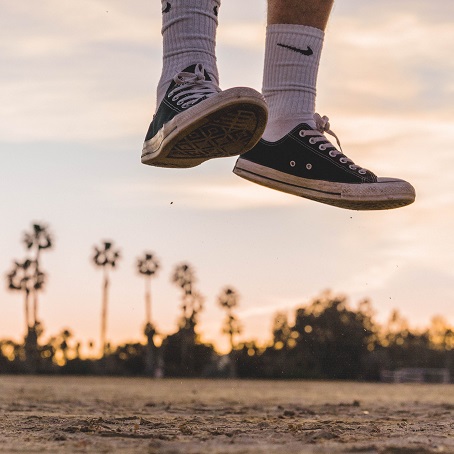 If you want to get better at jumping...Jump! Wouldn’t recommend jumping in Converse of course, unless they want to sponsor us.

With power training, you are moving as fast as you can, but this time you have submaximal weights (25-65% 1RM) on the bar. This type of training can play a big factor in your vertical jump height and should be combined with both strength and speed training.

Remember that the biggest factor for increasing jump height is how much power you can produce at your body weight. 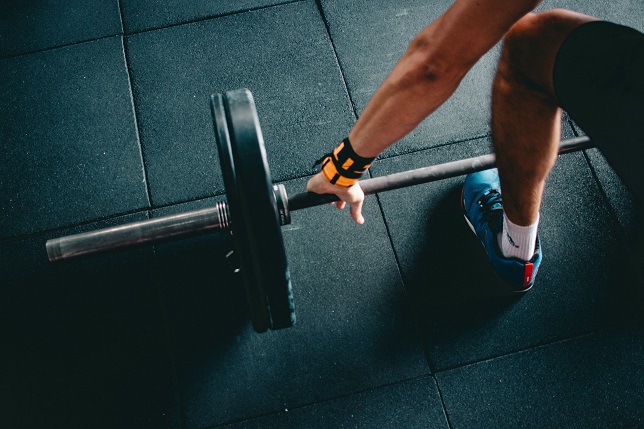 To perform your best vertical jump, your stance, take-off, arm swing, and landing mechanics need to be perfect. Once your mechanics are sound, a well-structured training program that builds strength, power, and speed should be followed.

If your goal is to increase jump height or even just power in general, give these tips a try. Chances are you’ll become a better athlete because of it. Make sure you understand why you’re doing things before you do them and execute every action perfectly.

Follow us on Instagram @SledDogDevelopment and be sure to send us your vertical jump progress as you set up your program!

Effects of Marijuana on Athletic Performance

The Athlete’s Guide to Burnout

The Athlete’s Guide to Burnout

Effects of Marijuana on Athletic Performance